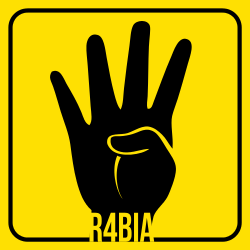 Rabaa or Rabbi'ah sign (; Egyptian Arabic: [ˈɾɑbʕɑ]; sometimes stylized as R4BIA) or, less commonly, Rab3a, is a hand gesture and a sign that first appeared in late August 2013, thought to be originated from Turkey and used in social media and protest marches in Egypt. It is used by the Muslim Brotherhood and its supporters in Egypt in the wake of the overthrow of Mohamed Morsi, which occurred after anti-government protests calling for his removal. On July 9, 2014, a Brotherhood-affiliated organization declared August 14, the day when the sit-ins were dispersed, "World Rabia Day," in an attempt to garner support across numerous countries.

The sign is named after the Rabaa al-Adawiya Square in Nasr City, Cairo Governorate, which surrounds the Rabaa al-Adawiya Mosque, where a sit-in was held by the Muslim Brotherhood and its supporters to celebrate the one-year anniversary of Morsi's inauguration. The sit-in lasted for about forty days before it was dispersed by security forces, leading to clashes that resulted in 638 deaths, of which 43 were police officers.

Supporters state that the gesture is used to express solidarity with what they call "the thousands wounded, killed and burnt by the Egyptian Army" during the dispersal of their sit-in. The origin of the sign is unknown.

Critics of the Muslim Brotherhood and the Morsi Government allege that the sign implies indirect support for terrorism, due to the sign's use being mostly limited to persons supportive of the Brotherhood, which has been designated a terrorist organization by Egypt. On the other hand, supporters of the Brotherhood, whether inside or outside Egypt, believe the gesture represents freedom and persistence. They also deny any association with terrorism.  Egyptian and non-Egyptian politicians, mostly supportive of the Muslim Brotherhood, are regularly seen making the Rabia gesture, which is identical to one common gesture for the number four. Among these politicians is Turkish President Recep Tayyip Erdogan. [en.wikipedia.org]

Louis Odion wrote in The Nation newspaper of January 9, 2019 thus: "while the opposition forces booed and heckled him at the National Assembly during the presentation of the draft budget, the old infantry general, exuding self-confidence even under fire, flashed his now famous eight-finger salute with a flourish that could only be meant to taunt traducers present. It was left for the political palmists to interpret that to the rest of us as a short-hand for eight years (term terms of office). And regardless of spirited attempts by opponent to draw a parallel between that sign and the symbol of a discredited extremist Islamic sect in Egypt, the Buhari people are not ashamed to show this off as their new mobilization tool." [Finally, the Buhari Effect]

Taqiyya is permitted in Islam, meaning lying. "Let not the believers take the disbelievers as friends instead of the believers, and whoever does that, will never be helped by Allah in any way, unless you indeed fear a danger from them. And Allah warns you against Himself, and to Allah is the final return." (Q 3:28).  He who makes peace between the people by inventing good information or saying good things, is not a liar." (Bukhari vol.3:857 p.533)

It is safe to suggest that 2019 election is being used to signal the overthrow of Democracy in Nigeria.