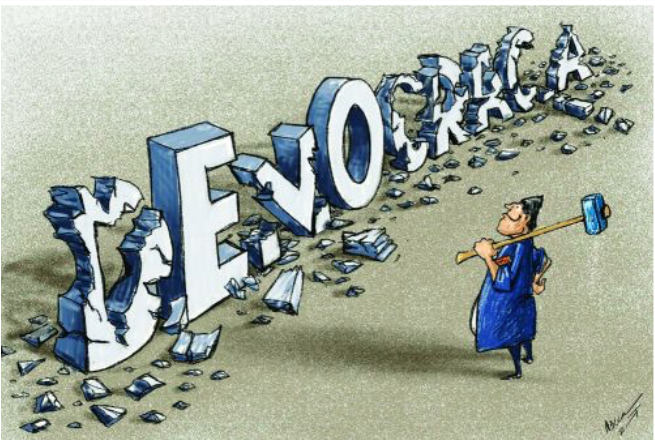 HIGHLIGHTS OF THE PAPER

Christians Must Not Destroy Democracy From Within

I have, as a lay faithful, refrained from quotations from the Bible to prove a point because I believe that the Church groups I have been dealing with are best placed to refer to and interpret the Holy Bible especially the New Testament.

As Christians, we have Christ (good) in us and Judas (betrayal) yearning to overcome us and it is left to us as humans to choose Christ (good) and with the correct guidance to reject Judas (betrayal).  We need the grace of God to recover from the diseases and the symptoms of treachery.  We also need the grace of God through reconciliation to return to Christ not Judas. Judas is the treacherous attempt to turn Nigeria from a Democracy to a Sharia country as a result of her membership of the OIC. Unfortunately, the three arms Government, the Legislature, Executive and Judiciary are dominated by Sharia compliant Muslims and Christians.  This explains the sham Democracy being practiced by the dominant political parties in Nigeria.  The attempt to replace thumbs with bullets, the murders of innocent Nigerians and the sham elections of 2019 are all symptoms of the disease caused by the ideology of Sharia or Islamism.

In the concluding paragraphs of my paper titled A Case for One Nigeria, One System, presented to the Catholic Bishops Conference of Nigeria (CBCN) in Benin City on October 25, 2019, (available at www.csmnigeria.org), I wrote:

The consequence of a, b and c above is that the Nigerian military high jacked democracy when Christians failed to appreciate correctly, Islamists’ propensity for violence as instrument of conversion.

SUBVERSION OF DEMOCRACY FROM THE CHURCH

In the book titled Soldiers of Fortune: Nigerian Politics from Buhari to Babangida 1983 – 1993, inferences can be drawn successfully to suggest:

WHAT IS DESTROYING DEMOCRACY IN NIGERIA?

We decided to narrate some of the incidents above in an attempt to showcase the loopholes which adversaries of Democracy are exploiting to compromise Government of the majority in favor of Government of the minority. Democracy is “residue of Church doctrine” while Sharia is residue of Islamism. The crisis in Nigeria is the contest for supremacy between Democracy and Sharia.

Ironically, Sharia is gaining the upper hand because the Church that is supposed to promote Democracy is promoting Sharia through the Islamist collaborators amongst the leadership of Christians. The National Christian Elders Forum (NCEF) produced a detailed report of how the Islamist collaborators in CAN ensured that Christian consensus to produce a Christian President during the 2019 election was frustrated. It was not surprising therefore that immediately after the questionable 2019 election in which President Buhari was declared the winner, Rev. Samson Olasupo Ayokunle rushed to congratulate him thereby using the collective clout of Christians in Nigeria to legitimize the flawed election. If this is not stealth jihad in the Church, we await to be educated on what constitutes stealth jihad.

To worsen matter, the Church itself no longer practices Democracy. As witnessed during the last election in CAN, four articles in the Constitution of the Association were violated to “re-elect” Rev. Samson Olasupo Ayokunle. Someone had suggested that CSMN should constitute a Christian Judicial Panel to interpret the Constitution of CAN in relation to the purported “re-election” of Rev. Ayokunle. If Christians destroy Democracy within the Church, why would anyone be surprised that Democracy is stultified in the country?

CSMN posits that if Christians want Democracy to survive in Nigeria, they have to ensure that it succeeds in the Church. Only then, would they possess spiritual and moral right to demand the promotion of Democracy in Nigeria. If Christians cannot summon the moral and spiritual courage to demand righteous election in the Church, then there would be no basis to expect that Islamists would promote Democracy for the country.

It is very clear from the above facts that with Islamist Boko Haram and ambitious Fulani herdsmen in our midst, Christians need to establish institutions that would ensure that Christianity remains a major religion in the “Democratic” Republic of Nigeria because Democracy is protected.  To survive in the face of Islamism, there is need for a more strategic, inclusive and preventive approach. The whole society must be involved, more so, when we have a section of the country, the North-East, under the control of Islamists.

Christians must appreciate the danger which Islamism poses to ordinary Christians.  And with the collaboration of some Christians especially those in authority, Pastors, politicians and technocrats in that order, Christians in Nigeria have no chance of surviving the jihad of the Islamists and this makes Advocacy not only necessary but also important and urgent, especially when Christians in Nigeria do not have a political party to protect Democracy.

Christians in Nigeria are yearning for a rallying point and they look up to Christian organizations for leadership.  And as has been shown herein, CSMN, which was established as the socio-political arm of the Church, is eminently qualified to play this role. “Once bitten, twice shy”, as a non-violent advocacy is necessary and is appropriate in the circumstance.