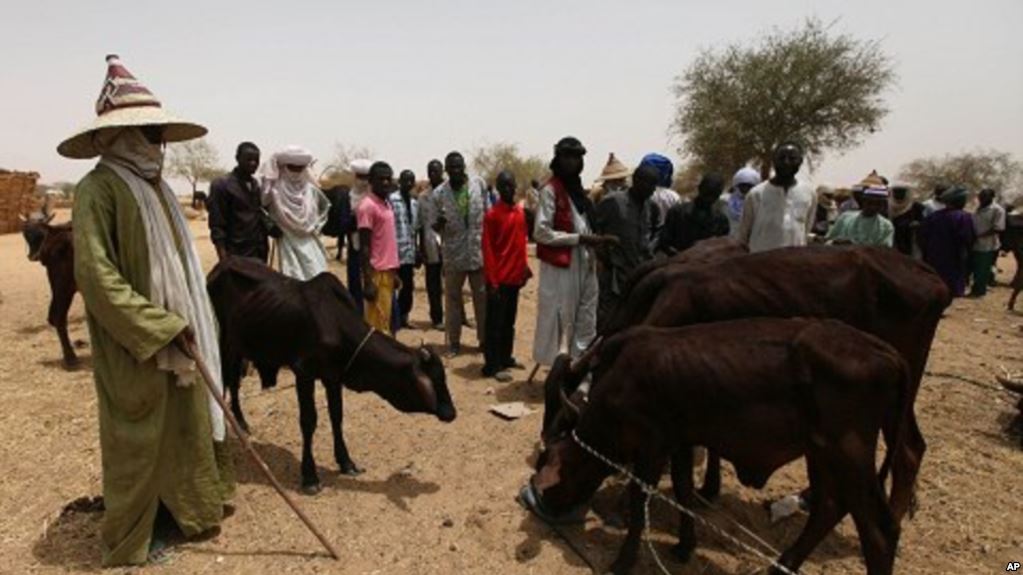 ADDRESS OF THE GENERAL SECRETARY OF THE CHRISTIAN ASSOCIATION OF NIGERIA, (CAN) REV. DR. MUSA ASAKE HELD AT THE NATIONAL CHRISTIAN CENTRE, ABUJA ON TUESDAY, 16THJANUARY, 2018

Gentlemen of the Press,

On behalf of the President of the Christian Association of Nigeria and the entire Christian Community here in Nigeria, I welcome you to this press conference in the precious and wonderful name of Our Redeemer and Savior, Jesus Christ. Amen. Since this is our first meeting this year, permit me to say HAPPY NEW YEAR to you and wishing you a productive and prosperous 2018.

We have invited you here to express our grave concern for the insecurity challenges that have continued to face us as a nation and Christians in particular in our dear country, Nigeria. We make bold to say that Nigeria’s security system has become dysfunctional and that this fact has been exposed by the inability of the various security arms to wrestle to the ground those threatening the existence of Christians and other innocent citizens in Nigeria,

As it is, they have not been able to come up with an efficient and enduring system that can overwhelm the resurgence of Boko Haram, Gunmen and Fulani Herdsmen who are prowling villages, shooting and killing innocent Christians. Instead the IG whenever there is killings going on his men on ground in that particular area will be looking the other way and if asked they will say they are waiting for order from above. The IG will always take side and make statements that are provocative to the people of the affected area. For example, when it happened in Southern Kaduna he said it was a communal clash and refuted the number of people killed. Recently he repeated the same statement in the Benue killings. That is an insult to the Christian community from a leader who is supposed to protect our lives and property. What a shame!

The Christian Association of Nigeria (CAN) has reviewed the catalogue of horrendous and inhuman attacks on several states and mostly Benue State from 2013 – 2018. The impression has now been firmly established that the Islamists of northern Nigerian have “legalized jihad” in Nigeria.

As if the attacks on Benue, Taraba, Kaduna, Plateau, Yobe, Borno, Nasarawa, Enugu, Imo, Abia, Rivers, Ogun and Oyo States are not enough, the Islamists and their agents have extended their trail of blood and destruction to Bwari in Abuja and Ilorin in Kwara State. On Christmas Day, 2017, Christian community in Bwari, Abuja was attacked; several lives were lost while business locations were burnt down.  On New Year’s Day in 2018, Christians observing “watch-night” service in Ilorin were attacked and three Churches burnt. As usual, the Security Agents did not intervene until the attackers had finished their horrendous assignment.

This pattern suggests collusion of the Security Units with the Islamists militia operating under such names as Fulani herdsmen, Boko Haram, “unknown gunmen”, and “group of vandals”. On 17th January, 2017, the Nigerian Air Force “accidentally”, in broad daylight, bombed a Christian IDP Camp and killed over 200 Christian refugees in Rann, Kala-Balge Local Government in Borno State. In December 2017, an Air Force spokes person confirmed that the Nigerian Air Force sent an Alpha Jet and an EC 135 attack Helicopter to fire “warning” shots at Islamist militia attacking Christians in Numan, Adamawa state, but not to kill them! The villagers were later to report that the Jet actually bombed the Christian villages resulting in the death of over 50 people, while, the Nigerian Air Force said it merely fired warning shots at the Islamist militia attacking the villagers. This is jihad as we cannot understand fired warning shots in the narrative of this attack.

Having reviewed the situation in the country, the Christian Association of Nigeria (CAN) wishes to note that some principal entities appear responsible for the current distress in the nation.

President Buhari was elected on a wave of unprecedented public approval in 2015. Unfortunately, within a few weeks of his election, he started creating the impression that he was in power to serve the interests of his Fulani ethnic group only. Discerning people were quick to note that contrary to his electoral promises, he actually meant to pursue core Islamist agenda. Almost every vital appointment in Security and Education went to Muslims from the North. He did not hide his disdain for the indigenous ethnic nationalities and, at every opportunity, showed preferential treatment to the Muslim North.

Under President Buhari, the murderous Fulani herdsmen enjoyed unprecedented protection and favoritism to the extent that the herdsmen treat Nigeria as a conquered territory. Rather than arrest and prosecute the Fulani herdsmen, security forces usually manned by Muslims from the North offer them protection as they unleash terror with impunity on the Nigerian people.

The bottom line is that President Buhari failed woefully to protect Nigerians. He willfully permitted the Fulani herdsmen to operate killing people, destroying communities wholesale, destroying farmlands and turning the entire Middle Belt into “killing fields”, all the while enjoying government protection from counter attack, arrest or prosecution.

By failing to curb the attacks of the Fulani herdsmen President Buhari has failed to uphold Section 14, Para. 2 (b) in the Constitution that “the security and welfare of the people shall be the primary purpose of government:”

Through his partial, sectional and discriminatory appointments, particularly in Security and Education, President Buhari violated Section 14, Para. 3 “The composition of the Government of the Federation or any of its agencies and the conduct of its affairs shall be carried out in such a manner as to reflect the federal character of Nigeria and the need to promote national unity, and also to command national loyalty, thereby ensuring that there shall be no predominance of persons from a few State or from a few ethnic or other sectional groups in that Government or in any of its agencies.”

In the recent attacks on Benue State, the President of Benue Branch of Miyetti Allah, Garus Gololo said they attacked the communities because 1,000 of their cows were stolen. Even if it was true that cows were stolen, who constituted Miyetti Allah into law enforcement agency, judge and jury to commit wholesale murder?

Miyetti Allah has openly rejected anti-open grazing bills in Taraba, Plateau and Benue States. In May 2017, the National President of Miyetti Allah, Alhaji Bello Abdullahi Bodejo and the National Secretary Engineer Saleh Alhassan openly declared at a Press Conference that the introduction of anti-open grazing bill in some states is a recipe for anarchy. Are we now to conclude that a business group has supremacy over State Governments?

1.                        In view of the foregoing, the Christian Association of Nigeria (CAN) calls on all lovers of freedom and democracy in Nigeria to rise against the tyranny of the Islamists, who manipulate the religion of Islam for political and cultural domination.  There is difference between Islam and Islamism. While Islam is a religion, Islamism is not a religion but a political ideology. Islamism in Nigeria is based on the Doctrine of Hate and supremacist ideology that the Fulani is superior to the other ethnic nationalities in Nigeria. This is what is at the root of the bloodshed and insecurity all over Nigeria. The clannish mentality of the Fulani places every other ethnic nationality in Nigeria as colonial subject or dhimmi (second class citizen), irrespective of religion or culture.

2.                        Most of the problems in the polity especially the ongoing genocide against Christians in the North Central are having religious and tribal undertone hence why the Islamic leaders are keeping mum to the massacre of our members in Benue, Taraba, Kaduna, and Enugu states. It is part of the grand agenda to take over our land, with this I have good news for you. “It will not work”

3.                        Instead of bringing the leadership of Myetti Allah... to book for being the masterminds of the genocide, top functionaries of the Buhari government are now advocating grazing colonies with a view of granting these criminals free land and government supports.

5.                        We need to know why the intelligence units of all security apparatus that we have in this country has not been able to discover the sources of supply of ammunition to Fulani herdsmen living virtually in the bush.

To restore permanent peace to all the trouble spots in the country, we demand the following;

1. The Myetti Allah organization should be tagged a terrorist organization. Its leaders should be arrested and prosecuted for the genocide against the Christian minorities in the Middle Belt.

2. President Muhammadu Buhari should overhaul the National Security Council with a view to sharing its membership equally between Christians and Muslims and possibly those who do not belong to either. No religion has a monopoly of competency, commitment and patriotism.

3. We call for immediate replacement of the Inspector General of Police because our security can no longer be guaranteed. We also demand immediate redeployment of all the Commissioners of Police.

Every Nigerian should condemn in strong terms and resist the attempt by this pro-Fulani government that “cattle colonies” shall be established all over the country. This is an insult on all Nigerians. The idea of “cattle colony” presupposes that the Fulanis are colonial masters. How and when one ethnic group transmuted into a “colonial master” over all the other 388 ethnic nationalities in Nigeria is unknown. Besides, after Nigerians roundly rejected “grazing reserves” who are the Islamists trying to deceive with change of nomenclature?

Thank you and God bless Nigeria.