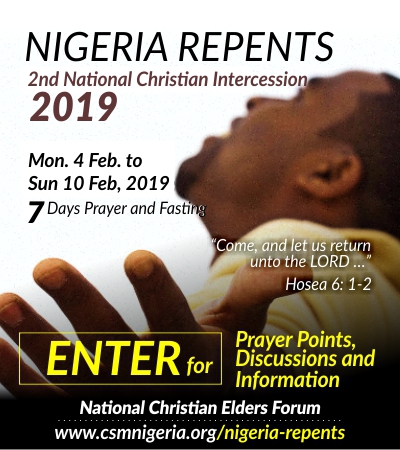 Greetings to you in the name of Jesus the Man of War.  It is with great awe I come again to you with the present discernment of and response to the sounds in the air, praying that the Lord would continue to find you at His altar “ _for such a time as this_ ” (Esther 4:14).
We have heard not only that the Lord shall mercifully come through for Nigeria but also that grave judgment hangs over the land; and we have also been shown the Philistines furiously sharpening their swords against a Day that they see as very near, “ _because he knoweth that he hath but a short time”_ (Revelation 12:12).   Having been alerted by insistent calls from some watchmen and watchtowers in the nation because of those recurrent ‘sounds’ in the air – those gladdening promises and frightful cautions from above, and having consulted with some of the leaders of intercession in the land, I hereby make the following call to you, that God would remember mercy in the coming judgment; that the heavenly messenger with _“the writer’s inkhorn_ ” might mark the foreheads of all that sigh and cry even as the slaughter starts soon from the sanctuary (Ezekiel 9:4,6).  Not only from the Heavenly voice but also from the present political rumblings in the nation, this call seems most timely, especially also with respect to the national electoral calendar for February 2019.   Thanks to God for the many organized and spontaneous prayer fires around the land. Only yesterday, a revered elder at the gate, the very respected Head of a national and continental prayer move, flew into my city on his own initiative specifically to bring a word to me and two others, the other two being the leader of a global women’s prayer initiative, and another international prophetic teacher.  At his breakfast table earlier in the week, he had had an encounter with God and had received a national message that he had to promptly fly down to deliver to us, at his own costs; a message following on the heels of the earlier prophecy from Dr Cindy Jacobs during a September global conference in Jerusalem, prompting the 2018 nation-wide Independence call to 24-hours of worship to God.  Among other things, his message was that the Lord has entered Nigeria in judgement as a Man of War, and we as His weapons of war should be ready and serviceable (Jeremiah 51:20-22); that Jehovah sees His purpose for Nigeria beyond the ominous ‘2019’ elections. In the same week, Prophet Chuck Pierce from the United States of America, at his own discretion and dates of his choosing as prompted by the Lord, was in the Federal capital city of Abuja in partnership with the respected Apostle Emmanuel Kure of Throneroom (Trust) Ministries, and this was his message in part, that “Nigeria will once again rejoice,” but not before there has been a “plowing up of this land”; a land that “will be plowed and plowed and plowed.” As if to tie the prophecy to what the elder Messenger had brought to the select Three of us in my city, it further stated, “This is your time to plow this land, and I have mobilized the angelic host to plow *with you* .”  The same prophecy described the present moment as “the beginning of seven months of *great conflict* .”   The trumpet has made no uncertain sounds; those who hear may well prepare themselves for the battle as the Lord enters the land to fight His cause.  While we keep shifting the initiative for the nation’s salvation to some vague ‘Church Fathers’ in Nigeria, not once has it been said to me by the same respected leadership of the present Body, that they look up to the intercessory community to save the land, which means you…The Week of National Repentance – and warfare – has been scheduled as follows:

* DATE: Monday, 4th February – Sunday 10th, 2019. * Everyone should fast during the day and find at least an hour to pray before midnight. * Each city centre should meet daily at their designated venues to spend at least an hour of corporate prayers. * On the seventh and final day, the meeting should include children, women and men, each group requesting God’s mercy during the times of ‘conflict,’ as well as urging the Man of War to continue His battle that He has begun in Nigeria – against every Pharaoh, Nebuchadnezzar, Herod, Sisera, Strong Man, etc.  A Passover Communion is recommended to close the day, besides psalms and hymns and scriptures that would feature. * Kindly find attached a guide for the daily meetings, and contact persons in respective states of Nigeria. Below is a programme guide for the Week.  Each centre may however be freely guided by the Spirit of God. _He shall break in pieces mighty men without number, and set others in their stead_ (Job 34:24). You may kindly share this information as severally as you can with your members and with other Christians, and be free to reach any of the undersigned with further matters of interest. May the Lord strengthen your good hands for much more, at “ _such a time as this_ ” (Esther 4:14) in this Week of mercy mingled with blood.  When we have heard the “ _sound_ ” a coming “abundance of rain,” that is when to go up the mountain to pray (1 Kings 18:41-42).  That God says deliverance is nigh makes it much more a time to watch and pray (1 Corinthians 16:9).  It is time to sanctify ourselves when God is about to show up on Sinai (Exodus 19:10-11). Shalom.